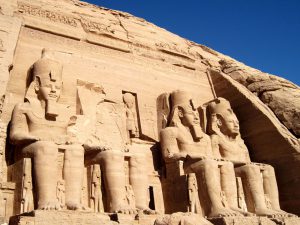 At early Morning, Saga Travel representative will pick you up from you hotel or Nile cruise in Aswan and transfer you by air conditioned vehicle to city of Abu Simbel (around 3 hours drive) to visit the Temples of Abu Simbel.

The two Temples of Abu Simbel, with their unique style, are considered to be the masterpieces of ancient Egypt. They reflect the glory and grandeur of the new Kingdom. The Egyptian government and UNESCO decided to co-operate in order to save these temples from the flood.

The Temple of Ramesses II was dedicated to the four universal gods Ptah, Re-Her-Akhtey, Amun-Re, and to Ramesses II himself.

You will have good chance to enter the temples from inside and make photos for this unforgettable trip. You guide will explain all needed information about the temples befor you enter, snce guides is not allowed to explain inside the temples

After your visit to Abu Simbel, your guide and driver will drive you back to you hotel or Nile cruise in Aswan.